Computer simulations are very powerful: in the case of molecular dynamics, we can model the positions and velocities of atoms or molecules and observe the emergence of pattern and structures in situ, following each individual atom in its trajectory.

However, when we study supercooled liquids or glasses, it is hard to probe in computer simulations very low temperatures or very tightly packed systems, unless we opt for indirect and clever routes to glean some information on the low temperature behaviour. It would be great if one could directly take a very cold (or, similarly, very dense) liquid at equilibrium and see how the constituent particles are arranged.

This is precisely what James Hallett has managed to do during his stay in Bristol using super-resolution microscopy: this method can access the coordinates of equilibrium themal packings so dense that a direct simulation would never do. Thanks to James’s clever imaging, we have then carefully analysed the individual coordinates and trajectories of dense repulsive colloids and managed to clearly show how the local environment of these densely packed equilibrium systems changes as the density is increased.

We have found some notable features: as we take denser samples, the liquid becomes gradually richer in regions where particles are arranged into five-fold symmetric structures; those regions display reduced mobility compared to other regions of the sample; randomly selected domains of the system become more and more “similar to each other” as the density is increased, accompanied by the decrease in the number of distinct configurations the liquid can take, a quantity related to its so-called configurational entropy.

Together with CP Royall, S Tatsumi, J Russo and PhD student J Robinson we have just published on the Journal of Physics: Condensed Matter a handy review on recent approaches to the exploration of very stable glasses in experiments and simulations.

We cover a variety of topics, including vapor deposited glasses in experiments, importance sampling in trajectory space, random pinning, representing distinct attempts to address the following question: is glassiness linked to some kind of novel thermodynamic transition in very low temperature liquids?

Supercooled liquids present dynamical heterogeneities at low temperatures: on a certain length and timescale, some areas are very mobile (active) while others are much more solid-like (inactive). This feature is often interpreted as the signature of the fact that the liquid, when supercooled, starts exploring different metastable regions of the free energy landscape.

A possible route to illustrate this effect is through large deviations of structural-dynamical obserables, as we first did in the case of a canonical atomistic model for glassformers, the Kob-Andersen mixture. A main observation of that work was that dynamical heterogeneities correspond to a first order phase transition in a (reweighted) space of possible steady states between high energy trajectories that are rich in structure and low energy trajectories that are poor in structure. Moreover, such a transition has a strong temperature dependence, so that the structure-rich trajectories become more and more likely to be observed as the temperature decreases.

Now, we have published a follow-up work on the European Physical Journal E, where we show that the same mechanism is at play in another model glass-former (the Wahnström mixture), showing that while the overall qualitative picture may be general, the details depend on the nature of the interactions between the constituents. Moreover, we also show that configurations extracted from the structure-rich trajectories have much larger yield stresses than the normal supercooled liquid: the emerging rigidity of glasses appears to be strongly related to the structural-dynamical transition that we have highlighted.

Hard spheres are one of the simplest model of fluid. When the density is increased, the motion is slowed down and non-trivial local arrangements of particles characteristic of the liquid emerge. We call these local structural motifs.

In hard spheres, special role is played by structures with pentagonal rings, such as icosahedra or pentagonal pyramids.

In collaboration with Pierre Ronceray (Princeton), to appear on the Journal of Chemical Physics, we have shown that if we study the cross-correlations between the variation of populations of different motifs we can understand more of the phase behaviour of this model liquid: for example, we can predict its propensity to form more motifs of a given type if an external field is applied; or, we can understand and classify different motifs that coexist in the liquid phase.

More details can be found in the JCP Editor’s Pick:

A glass is (broadly speaking) mostly composed of particles that very slowly move due to surrounding cages formed by the disordered structure of the neighbouring particles. A way to study the glass transition is to actually freeze-in a subset of the particles and observe how this induces changes to the slow relaxation and how this relates to the emergence of local order.

The freezing-in procedure (also called pinning) has a secondary important effect: the pinned liquid has a “simplified” configurational space, as many configurations become forbidden. The number of available configurations (and hence the configurational entropy of the liquid) is therefore reduced by the simple pinning procedure and if a thermodynamic origin of dynamical arrest is to be surmised, such a reduction would be a necessity.

Some years ago, Ian Williams designed a novel, clever way to pin large two-dimensional colloidal supercooled liquids. In an article recently accepted in the Journal of Physics: Condensed Matter we have shown that the technique allows us to observe the crossover from a free-flowing liquid to a pinned glass and that this is accompanied by very limited structural changes. However, if we map the configurational entropy of the experiments with the entropy measured from model numerical simulations, we do observe that accounting for the fraction of pinned particles leads to a reduction in the estimated configurational entropy.

We just published on the Journal of Chemical Physics the experimental and computer simulation work of a Ioatzin Rios de Anda (PhD student in the Royall group) on kinetically arrested crystalline phases in colloidal binary mixtures.

Despite slightly different conditions (presence/absence of confinement or polydispersity in the particle sizes) the experiments and simulations match in the fundamental message of the work: when we have two species rather different in sizes, crystallisation of the bigger species can occur before the reordering of the smaller species, forming long-lived kinetically arrested structures (interstitial solid solutions), characterised by a high density of imperfections and vacancies. This shows how challenging the formation of a well ordered binary crystal is and, on the other hand, how they can potentially be considered for the realisation of partially ordered porous matrices.

We have just published in the Journal of Chemical Physics the simulation work of a brilliant former master student of the School of Physics at the University of Bristol (Thomas Jenkinson) on the local structural changes occurring during ageing in two atomistic glass formers with Lennard-Jones interactions (the Kob-Andersen and Wahnström mixtures).

We find some expected results (local order steadily increases as the out-of-equilibrium liquid ages) and some more surprising ones (for example, the rate at which such increase occurs changes weakly for temperatures above the apparent dynamical divergence of viscosities, T0). We also investigate the effect of transient deep quenches, finding very moderate traces of so-called rejuvenation.

Rattachai Pinchaipat is a crafty experimentalist (PhD student in Bristol) that I have had the pleasure to work with within a Bristol-Mainz collaboration aimed at demonstrating in experiments the existence of phase transitions in trajectory space for supercooled liquids. Our work is going to appear in Physical Review Letters. Here is the preprint.

In Mainz, preliminary simulations on hard spheres in trajectory space (by Matteo Campo) have sampled the tails of the probability distribution of time-integrated structural observables and predicted long non-gaussian tails (signature of a phase transition). In experiments, Rattachai managed to find an analogous signature via subsampling the trajectories of a rather large system.

The result demonstrates that the dynamical heterogeneities that characterise fragile glass forming liquids can be read as the coexistence, in trajectory space, of different long-lived (metastable) stationary states: some are structure-less, while others show the presence of extraordinary extended and long-lived motifs. Crucially, the phase transition between the two states is not accessible in current experiments, and could eventually never be accessible, if it is always buried in the tails of the probability distribution.

But this is another story… (actually, this story).

Our work on curved space and frustration with Gilles Tarjus at the Université Pierre et Marie Curie in Paris is  published in Physical Review Letters, 118, 215501.

In it, we provide a test of one of the competing theories for the origins of the glass transition: this is geometric frustration, i.e. the idea that the slowing down observed in glass forming liquids goes hand in hand with the formation of particular non-cristalline geometric motifs, that increase in size as the liquids are cooled.

We test this on the most favourable ground for the theory, which is a curved manifold. We do this for the first time in three dimensions, observing the structural evolution of a glass former on the surface of a sphere embedded in four dimensions (This is a funny space to work in. A beautiful way to visualise such a hypersurface is to use the so-called two-ball construction, see image above, which nicely matches with the vision of the universe that Dante and his teacher Brunetto Latini had).

What we find is that geometrical motifs become gradually unfrustrated as the curvature increases (which is compatible with the basic assumptions of geometric frustration) and ordered phases (with some tricky defects, that we discuss in the Supplemental Material) spontaneously form for low enough temperatures. However, the size of the domains in such motifs is tightly coupled with the slowing down only for very strong curvatures, making geometric frustration just one of the mechanisms that eventually play a role in realistic glass-forming fluids (that exist in our ordinary Euclidean space). 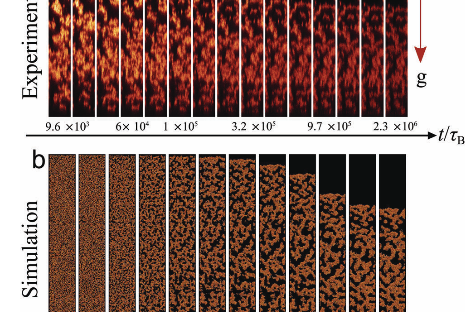 Azaima Razali (Bristol) and Christopher Fullerton (Bath, now in Montpellier) have performed experiments and simulations on the effect of extreme confinement in colloidal gels and their work (to which I have the pleasure to add my contribution) has just been published in Soft Matter.

The notable result is that while gelation is often employed in bulk systems in order to slow down sedimentation, in strongly confined systems the opposite appears to be true, with sedimentation facilitated by the formation of a percolating network.

The full article can be found here: